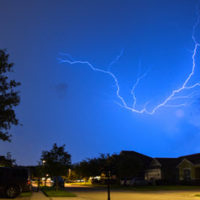 A power surge is an extreme spike in your home’s electrical line, and a power spike can cause damage or destruction to a variety of expensive electrical devices. A surge protector will not protect against very high spikes, such as an electrical surge from lightning. Unfortunately, most homeowners’ insurance policies do not cover power surges, depending on what the cause of the surge was. Additionally, utility companies, such as FPL Energy Services, which provides much of South Florida with electricity, are also not liable for damages caused by voltage fluctuations. If you suffered significant damage to your personal belongings because of a power surge, your best option is to get in touch with an experienced West Palm Beach homeowners’ insurance lawyer.

Lightning Strikes are Usually Covered Under Most Policies

When most people think of a power surge, the first thing that comes to mind is a lightning strike. It is true that a lightning strike to a utility pole, near a utility pole, the ground near an underline wire, or a house or building can cause a devastating power surge. While lightning can cause a electrical pressure surge of millions of volts, lightning is actually one of the most unlikely causes of a power surge. Power surges caused by lightning are the only type of surges typically covered by standard insurance policies. If your power surge was caused during a lightning storm and your insurance company has still refused to pay out the claim, you need the assistance of an experienced attorney at your side.

Power Surges That are Not Covered by Standard Insurance Policies

Most power surges are caused by large home electronic devices, such as washing machines, space heaters, dishwashers, refrigerators, and air conditioners. When these large devices are switched on or their motors start up, they can cause a powerful electrical surge that can wipe out every electronic device plugged into your home. The average American household has 24 electronic devices such as smart phones, desktop computers, laptops, iPods, iPads, and Kindles, according to Forbes, which equates to thousands if not tens of thousands of dollars in value. If your homeowners’ insurance provider has denied your claim because you suffered a loss that was not covered under your policy, you need to speak with an attorney about your options for compensation.

Power surges can strike at any time, and even surge protectors cannot stave off surges caused by lightning or other high-energy electrical spikes from certain electronics. The attorneys of the Celeste Law Firm have experience dealing with insurers who refuse to pay out claims, based on their initial assumption that the power surge was caused by something other than a lightning strike. However, according to FPL, Florida is the lightning capital of the U.S., and there were nearly 12,000 lightning-related insurance claims in 2015 alone. To speak with a West Palm Beach homeowners’ insurance attorney about your claim, contact us today to set up a free consultation.