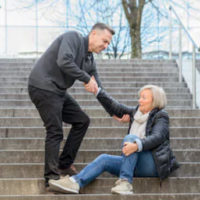 For a moment, assume that there are two separate hypothetical slip and fall accidents that happen at the same time and place. In the first, a young healthy bodybuilder slips on liquid left on a business’ floor. As he is young and healthy, he suffers a sprained wrist, which heals nearly completely. As such, the jury may award him a small damage award.

In the second scenario, the person who falls is an older, frail woman. When she falls, she fractures her shoulder, breaks a finger, and, while waiting for emergency responders, suffers a heart attack because of the stress and trauma. Should the jury award her a larger award than the young man received even though they slipped under the exact same conditions?

In both scenarios, the business was negligent in the exact same way–leaving a substance on the floor. However, because of the background and health of the victims, the injures were very different.

Is the business liable to pay more money in damages just because the older woman had frail bones, or a heart condition, whereas the young man did not? Is the business responsible for damages related to the woman’s heart attack, because even though it was caused by the fall, a heart attack is not an injury that is normally anticipated to occur when someone falls on liquid?

These hypotheticals explain the theory of the “eggshell plaintiff.” This doctrine applies not just to fall cases, but any kind of negligence or malpractice case.

The eggshell plaintiff doctrine holds that a defendant must accept a victim as it finds him or her. The defendant cannot benefit from the fact that an accident victim was “more prone” to sustaining serious injuries due to the metaphorical “eggshell” body. So long as injuries are caused by someone else’s negligence, it does not matter.

Plaintiff’s Conditions Are not a Valid Defense

Examples may be a victim suffering a more serious injury than would be expected because of a bone ailment which makes his or her bones more brittle, or hemophilia, which may make a serious injury, such as a compound fracture, into something life threatening that can require extended hospitalization.

Do You Need Legal Help?

If you have suffered injuries in any way, please don’t hesitate to reach out to the West Palm Beach personal injury attorneys at Celeste Law Firm today. We can assist you in recovering the compensation that you deserve.